Probate is the legal process with the court by which your property is transferred upon your death to your beneficiaries, including children and spouses. Today, in California, it takes approximately 1 ½ - 3 years before the probate process is complete. If you have minor children, the judicial process can take much longer and will require judicial intervention until your minor children become adults.

Probate is also a public proceeding, where private details of your life and property are disclosed to the public.

If you die with a Will ("testate"), the probate court determines if the Will is valid, hears any objections to the Will, orders that creditors be paid and supervises the process to assure that property remaining is distributed in accordance with the terms and conditions of the Will.

What is a Will Intestate?

If you die without a Will ("intestate"), the probate court appoints a person to receive all claims against the estate, pay creditors and then distribute all remaining property in accordance with the laws of the state. The major difference between dying testate and dying intestate is that intestate requires your assets to be distributed to beneficiaries in accordance with the distribution plan established by state law, which may differ considerably from what you want. Conversely, a testate estate (after payment of debts, taxes and costs of administration) is distributed in accordance with the instructions you provided in your Will.

State law sets the cost of probate. The fees charged are a percentage of the “gross assets” rather than the “net” assets. For example, if you own a home worth $500,000, but have a mortgage of $450,000, the probate fees are calculated as a percentage of the $500,000, which is the gross value. Further, what little remains after probate fees and court costs are taken out may take years before your beneficiaries receive what you have left for them. Below is a schedule of fixed charges and costs to probate an estate in California. 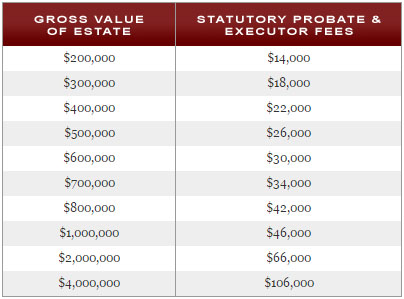 Filing the Petition for Probate and Confirmation of Executor

The first step in any probate is the filing of the Petition for Probate, Proposed Order, Letters Testamentary, Notice of Hearing, and many related ancillary petitions and documents. Once filed, the court then sets the case for the initial hearing. The hearing is typically set by the court 3-4 months after the filing the initial petitions.

Notices are then served on all heirs and beneficiaries, and notice must also be published in the newspaper. Proofs of service are then filed with the court prior to the first hearing.

Initial Hearing on Petition for Probate

At the first scheduled hearing, the Court will consider the Petition, and if approved, the Court will admit the Will (if any) into probate, and confirm the appointment of the Executor. Letters Testamentary will then be issued, allowing the Executor to exercise certain authority to administer the estate during the pendency of the probate process.

What Happens After the Appointments?

What happens after the appointment?

Once the Executor is appointed by the Court, the Executor will have three primary responsibilities, including:

After appointment, the Executor must marshal, or take possession, of all of the decedent's property to be administered as part of the probate estate. For example, the Executor should contact financial institutions and request that assets be distributed to the Executor, who then deposits these assets into an account for the estate.

Next, the Executor must notify the Internal Revenue Service of his or her appointment by filing a Notice of Fiduciary Relationship (IRS Form 56 ).

Next, begins the process of appraising all the decedent’s assets. Many of the assets must be sent to the Probate Referee for appraisal. Once completed, typically 3-6 months after the initial hearing, the Inventory and Appraisal will be filed with Court. Notices are also sent out to creditors.

Who is the Probate Referee?

The property appraised by the Executor, as well as any property appraised by an independent expert, is not included in the computation of the Referee's fees. The personal representative is responsible to deliver the completed and signed Inventory and Appraisal to the Probate Referee, together with any supporting data to enable the Probate Referee to appraise the property listed in the Inventory and Appraisal (such as profit and loss statements for closely held or privately owned business interests).

The Probate Referee should return the completed Inventory and Appraisal with the asset values within 60 days (unless he or she needs additional information). Paying debts and liabilities of the estate.

In addition to the marshaling of assets and preparing and filing the Inventory and Appraisal, the Executor must also ensure the debts and liabilities of the estate are satisfied. This includes the filing of all tax returns, including the Final 1040 for the decedent, a 1041 if the estate annual income greater than $600, and the 706 Federal Estate Tax Returns.

What authority does the Executor have to manage the estate assets?

The Executor’s authority includes "authority to administer the estate under the Independent Administration of Estates Act" with "full" or "limited" authority, depending on what the initial Order for Probate and Letters Testamentary provided. In either event, the Executor will have a wide range of powers to conduct certain transactions without court supervision, that is, without having to get court approval first.

However, it may still be necessary to notify the persons who have an interest in the estate before you can perform certain actions.

What types of actions require a Court hearing?

You must have a hearing and get court approval before you do the following:

What types of actions require a Notice of Proposed Action?

After giving a Notice of Proposed Action (and if the Executor does not receive any objections), the Executor may do the following:

As Executor, there are many responsibilities and duties towards creditors.

As Executor, there is a duty to notify both known and reasonably ascertainable creditors of the death of the decedent. This includes not only creditors with outstanding bills, such as doctors, credit card companies and utility companies, but also people who may have a potential claim against the decedent on account of something that happened during the decedent's lifetime.

For example, if the decedent was involved in an auto accident in the year prior to his or her death, or if the Executor learns that someone, even if that person is a relative, may have loaned money to the decedent and may expect to receive payment from the estate, the Executor should notify those persons that Probate has begun.

If the decedent may have incurred any tax liability before death, whether assessed before or after the decedent's death (except for real property taxes or assessments), the Executor must give notice to the appropriate tax agency.

It is also a good idea to send notice to the Department of Health Services even if the Executor does not have any reason to believe that decedent or his or her surviving spouse received Medi-Cal health benefits.

The Executor must prepare special Probate notices, called “Notice of Administration to Creditors” and include the names and addresses of each creditor or potential creditor who is to receive this notice. This means that the Executor must take reasonable steps to identify any such creditor. For example, an Executor should inspect the decedent’s desk drawers, mail, and other locations reasonably believed to contain information concerning the decadent’s creditors. That said, the Executor does not need to conduct an extensive investigation or search for creditors.

As with all Notices in Probate court, all interested parties must be properly served, and the proof of service must be filed with the court many days prior to the next scheduled hearing.

The Notices must be served on the creditors within the later of:

1) Four months after the date Letters are first issued, or

2) 30 days after the Executor first has knowledge of the creditor (even if four months has already passed).

The notice to be mailed to the Department of Health Services should be mailed not later than 90 days after the date Letters are first issued, and should include a copy of the decedent's death certificate.

Paying the decedent's debts even if the creditor has not filed a claim.

A creditor may request that you pay debts only if you are certain that the bill is valid and there is enough money in the estate to pay all claims in full, including taxes that may be owed. You may treat a bill as a "demand for payment," even if the creditor has not filed a formal claim.

However, if there is any question as to whether the bill is valid or whether there are enough assets of the estate to pay all of the decedent's debts in full, the Executor should wait until the end of the claim filing period (the later of four months after Letters were first issued, or sixty days after the last Notice of Administration was mailed) to determine the total amount of creditor's claims filed against the estate.

Secured creditors (such as financial institutions holding a mortgage on the decedent's home or other real property) should also get notice of the Probate administration.

However, a secured creditor does not need to file a formal claim in order to enforce their rights to the secured property, as long as the secured creditor agrees not to pursue any claim against other estate property. The Executor should continue to make mortgage payments if there is sufficient money in the estate to make payments (and pay the other expenses of the estate).

Preparation of the Accounting & Petition for Final Distribution

The next step in the probate process is the preparation of the Accounting, unless waivers of accounting have been obtained from all beneficiaries. The accounting must meet specific guidelines found in Probate Code sections 1060-1064 and 10900.

Additionally, the Petition for Final Distribution must also be prepared and filed with the court. This petition involves not only providing a detailed accounting for the court, but providing a full narrative of all important events that have transpired since the initial appointment as Executor. Additionally, this petition also serves as a final request for court authorization to pay certain Executor and Attorney’s fees, as well as the proposed distribution to each of the beneficiaries. These petitions must also be served on all relevant parties, including proofs of service that must be filed with the Court.

Typically, the court will set the petition for hearing 3-4 months after the filing of the Petition for Final Distribution.

Hearing on the Petition for Final Distribution

At the scheduled hearing, the Court will review the Petitions, as well as the court’s file, ask questions of counsel, and conduct the hearing on the petition for final distribution. If the court grants the petition, the Order will need to be recorded with the County Recorder if the estate contains any real property.

What Happens after the Hearing on Final Distribution?

After the hearing, and in conjunction with the Court’s Order, the Executor distributes the decedent’s assets, records the judgment (if real property is involved), and distributes legal and Probate fees. Thereafter, the Executor must file Receipts on Distribution, and any final income tax returns, if required.

How to be discharged from personal liability

The Ex Parte Petition for Final Discharge and Order should be filed with the Clerk's Office, who will arrange to have the petition submitted to the judge for signature.

> Do You Need Estate Planning?

> What Happens if I dont have an Estate Plan?

> What is a Revocable Living Trust?

> If I decide to pursue my claim, how long will it take to resolve my case?

> Will I have to sue my principal?

> If we do have to sue, how often will I have to appear in court?